WORLD cyclocross champion Mathieu van der Poel makes his debut in the Tour de France today as Wout Van Aert goes into his third Tour with his green jersey winning ambitions sadly curtailed by recent surgery for appendicitis. Van der Poel's Alpecin-Fenix team has been granted a Tour place for the first time yet both riders have Olympic ambitions on the horizon which mean they might not make it to the finish in Paris.

The opening puncheur-friendly stages in Brittany, however, suit both riders and we should see them going head-to-head to show their form right from the Grand Depart. Both cyclocross stars will be targeting early stages and they could even battle in intermediate sprints to be the early wearer of the green points jersey as well as the leader's yellow jersey. A major rival for the pair will be French world champion (and former cyclocrosser) Julian Alaphilippe.

With defending green jersey Sam Bennett not starting the Tour some pundits were backing Van Aert to win that classification from Peter Sagan before the Belgian had surgery to remove his appendix in early May.

Van Aert missed a week's training after the surgery and went into his team's Sierra Nevada altitude training camp as "one of the least strong" and has subsequently had to dial down his ambitions for the Tour slightly. The Belgian would have been a firm favourite to hold the leader's yellow jersey before perhaps focusing on the green points classification.

The Belgian impressively bounced back to win his first Belgian road race title last Sunday from a three-up breakaway with Edward Theuns and Remco Evenepoel after skipping the defence of his time trial title to remain in Tignes at an Alpine training camp.

"If I were to ride the Belgian time trial championship, I would miss five days of the second altitude training camp and I will really need those extra training hours and the altitude stimulus," Van Aert told reporters back in May.

At a pre-Tour press conference Van Aert made it clear that he has 'protected rider status' for the early stages but his role later in the race will be to support his team leader Primož Roglič.

"I think it's clear to everyone that I can hunt for a stage victory or a best possible result in the first weekend [yellow jersey - Ed]," Van Aert said during the conference. "The team is here with one big goal and that's getting the best possible GC with Primož. We'll never lose that bigger goal. I don't see issues there but, on the other hand, I'll be free to place myself in the stage finals."

One of the main problems with Van Aert's Tour ambitions is that Mathieu van der Poel may well have exactly the same target in the first week of the race.

"Yeah, there's big pressure trying to win in the first two stages and I think many riders are focused on those two," Mathieu van der Poel told an online press conference, "Of course, I'm going to do everything I can do to win a stage."

Van der Poel's national championship last Sunday went very differently to Van Aert's as the Dutchman pulled out of the race to defend his jersey. Poor weather forced Van der Poel to leave the Tour de Suisse early (after winning back-to-back stages at the beginning of June) feeling unwell and that earlier illness possibly contributed to him fading in the title race after launching an early attack.

Both race in new colours

To spot the pair of favourites on the first stage of the Tour today you will have to look out for new colours - Van Aert will wear the red, gold and black of Belgian road champion while Van der Poel's team race in a purple and gold homage to his late grandfather's Mercier team colours (for the first stage only).

With the Olympics in mind the two cyclocross stars may leave the Tour early but before they do we're sure there will be fireworks and more than a few visits to the podium. But, you never know, the pair may even go right on to a final showdown on the Champs-Élysées. 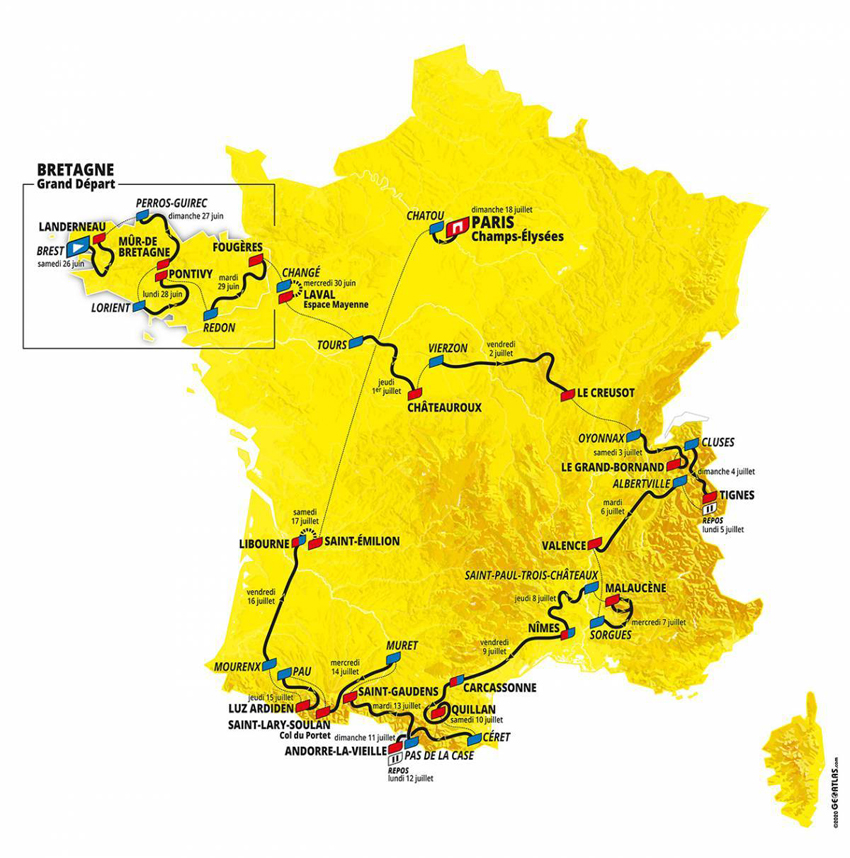