A rise in the number of COVID cases in Ostend put the UCI World Championships at risk of cancellation, but thankfully the event goes ahead. This page will be updated with Worlds stories throughout the weekend.

THE wooden steps that saw a couple of slips in yesterday's Under-23 men's race - the most dangerous of which was Thomas Mein's - have been covered in white carpet ahead of today's races. In the heavy rain the wooden treads of the staircase had become as slippery as ice.

According to Sporza: "To counter the negative comments on the staircase, we put a carpet on it," organiser Rik Debeaussart said. "About a thousand riders passed there yesterday and only two fell. Zdenek Stybar also told me it was completely safe and that was part of cyclocross."

"We did not receive a comment from the UCI, but we have put carpet on the stairs anyway."

This page has been updated with Worlds stories throughout the week (below). 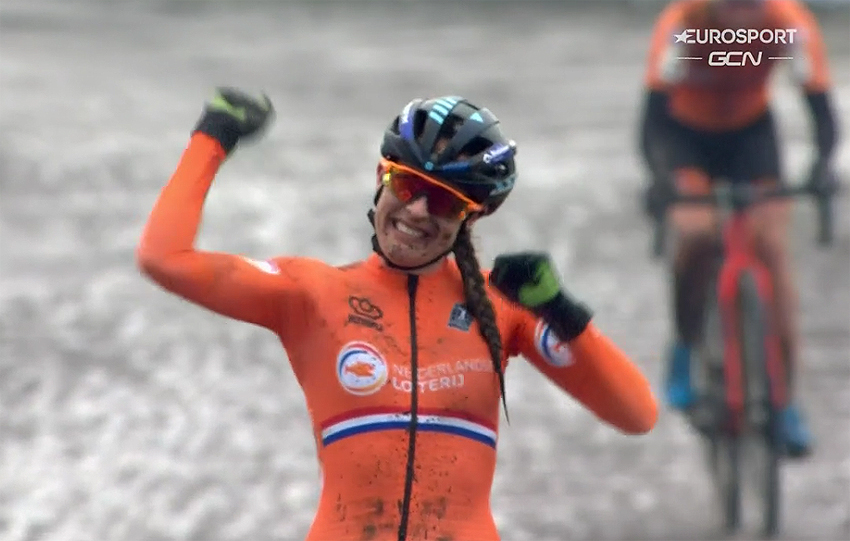 DAY ONE: Double Dutch as defending champions are beaten

ON the first day of the 2020-21 World Championships it was the Netherlands who captured both gold medals. Pim Ronhaar and Lucinda Brand were best over the tough Ostend course as both defending champions (Kamp and Alvarado) were beaten. You can watch both races here: https://bit.ly/3pAFiYd<

"The section over the bridge and on the beach will be extremely difficult. The second half on the race course is a bit more technical. There are turns after turns, but you are not going to make the difference there," Van der Poel told Sporza.

When asked whether the course favoured himself or Wout van Aert, the Dutchman replied: "It is certainly a course where we can both do our thing. On the horse racing track I have the advantage, the bridge and the beach will be better for Wout. The beach is treacherous. It is possible to quickly gain an advantage of 20 seconds, but you can also lose 20 the next lap. It is important to remain calm."

"The course has pleasantly surprised me. It doesn't get muddy here and I also like to race in the sand," Van der Poel concluded.

AMERICAN Curtis White takes and talks us around the Ostend course finding "a nice mix of heavy sand, flyovers, and fast and flowing turns. This is before the rain hits, so I'm enjoying my file treads." 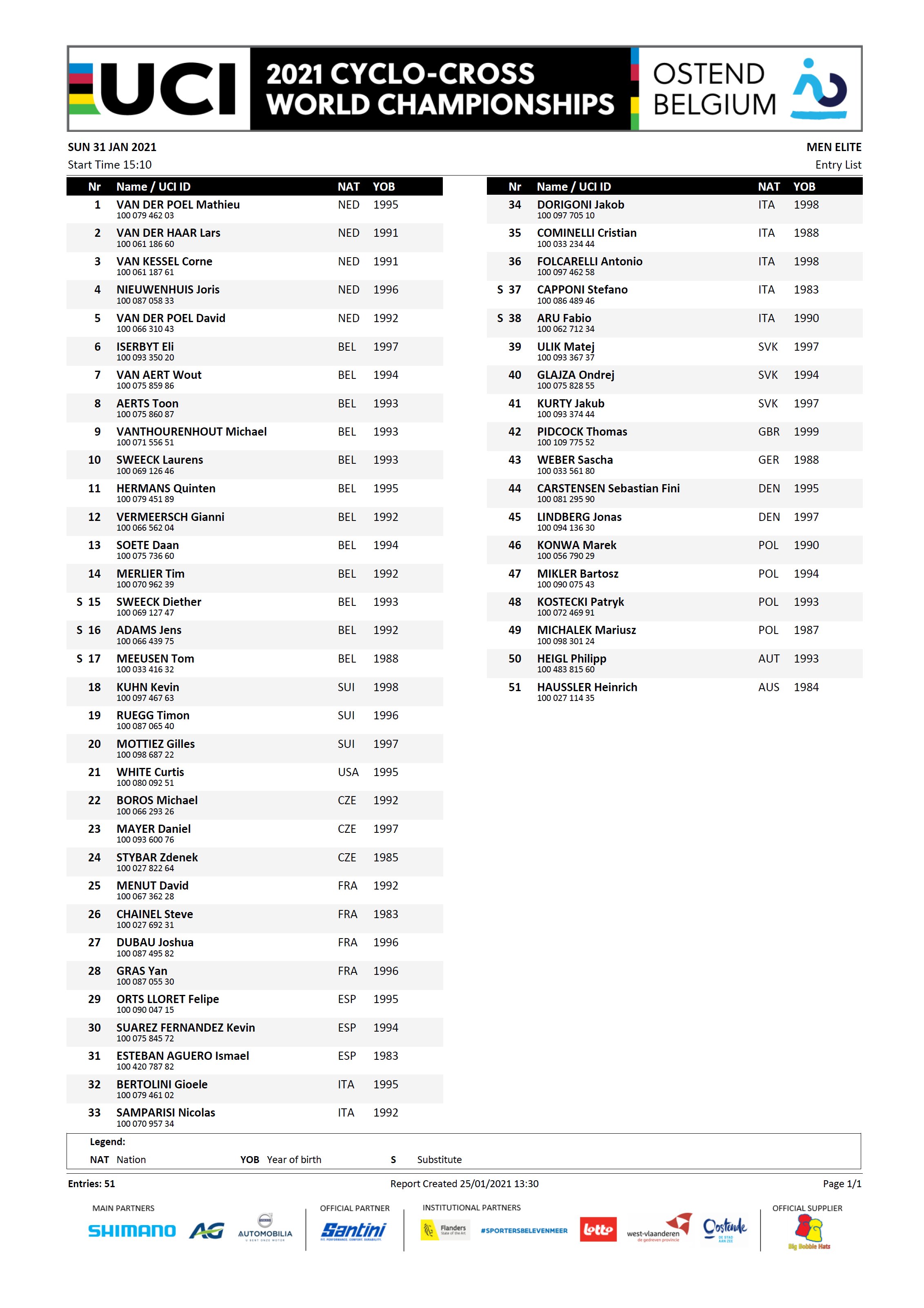 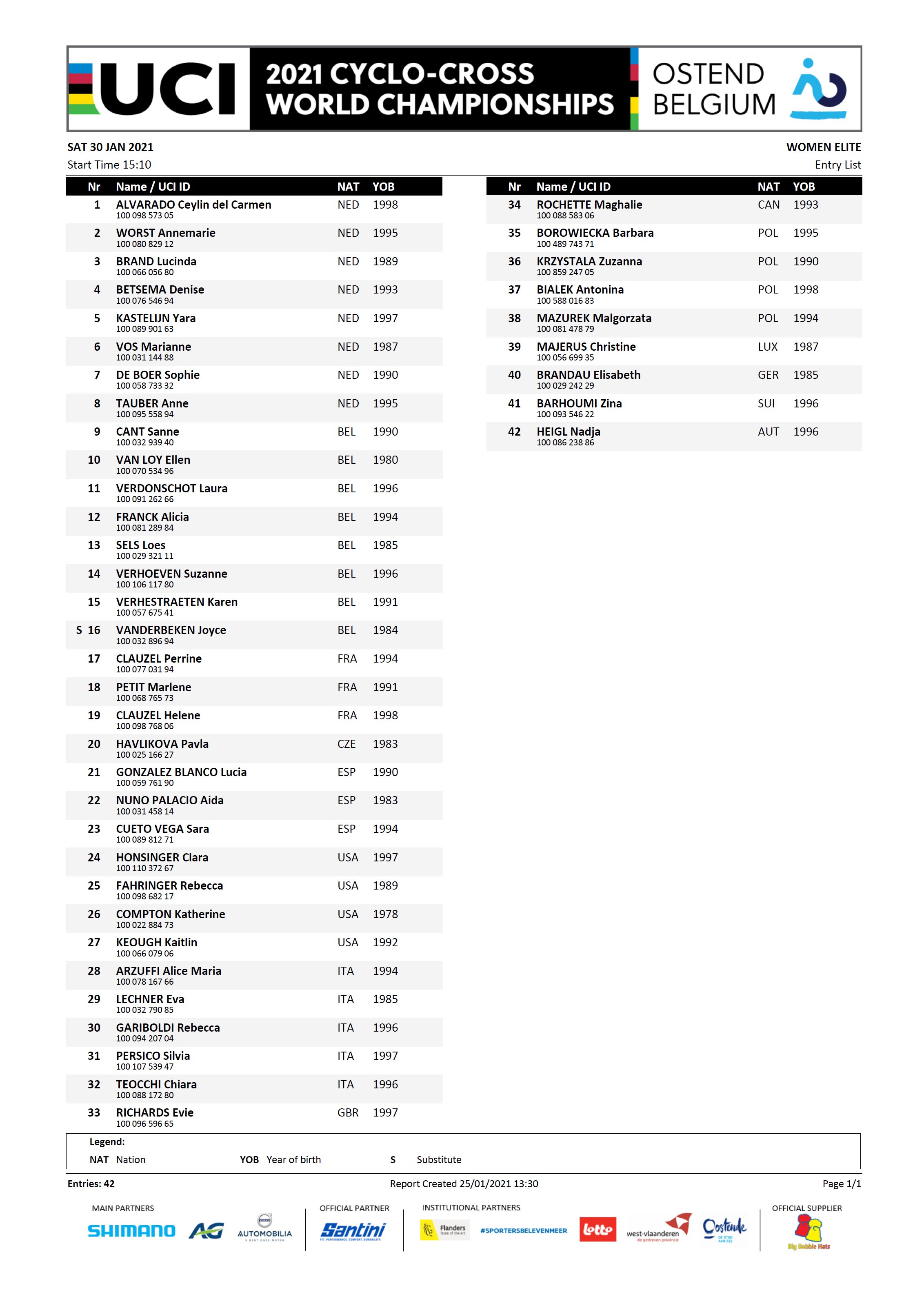 AUSTRALIAN Tour and Vuelta stage winner Heinrich Haussler has been named by Australia for the World Championship on Sunday. Team Bahrain's Haussler has raced a number of 'cross races recently with the 2021 road season in mind.

"It's really addictive. Cyclocross demands a lot from your body and I love that," Haussler told Sporza.

"The benefits you get from the cross are enormous," added the Australian. "Next month I'll turn 37. As you get older, you lose strength and explosiveness. Those are qualities you need in the Classics and the sprints and cyclocross is the ideal way to make up for that.

Next winter, Haussler told Sporza that he wants to take 'cross more seriously. "My Bahrain-Victorious team has given me the freedom to race."

"But from next season we will probably take a more professional approach, with a mechanic and a bit more support in the pits. At the moment, I still spray wash my own bike after the races!" 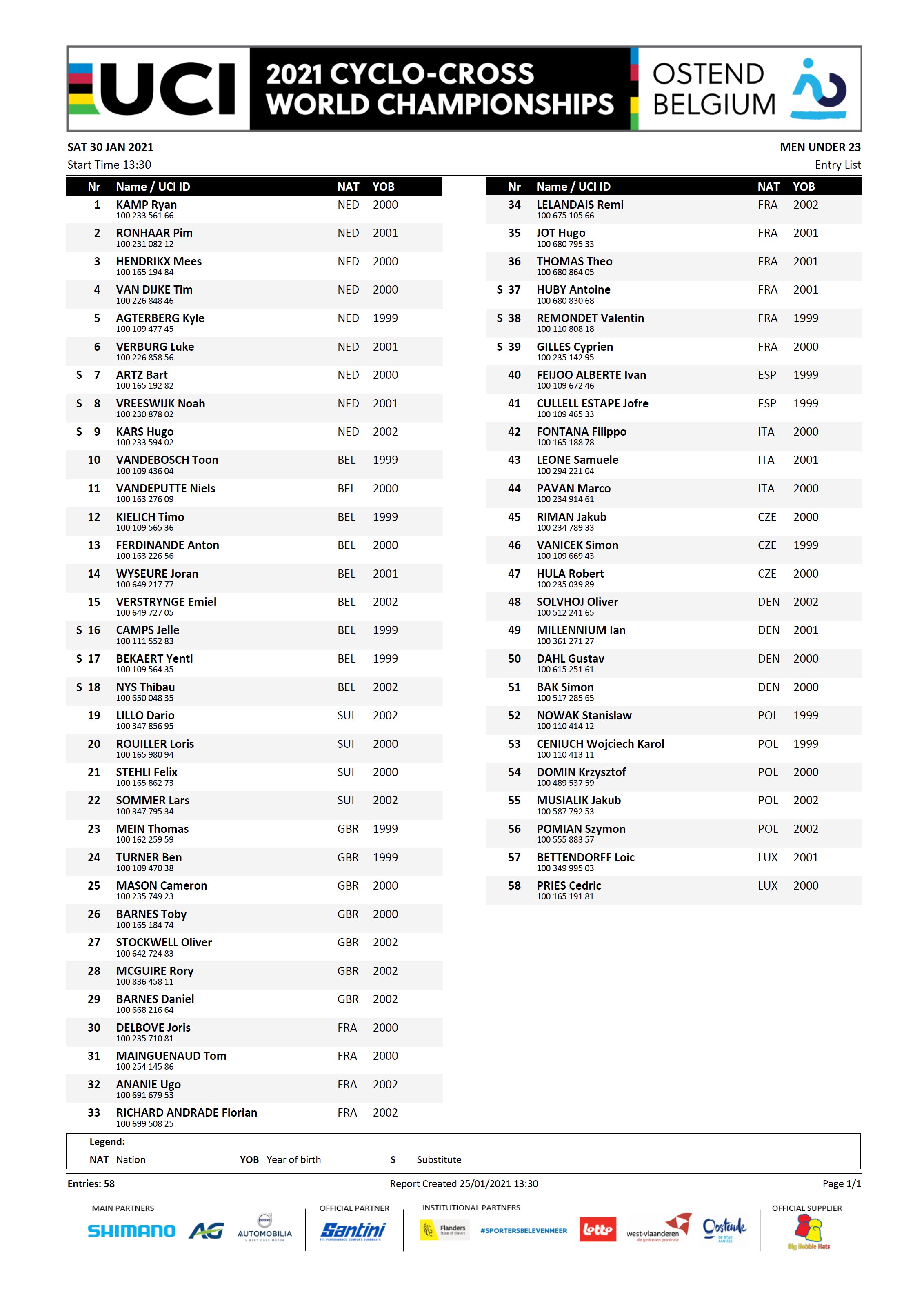 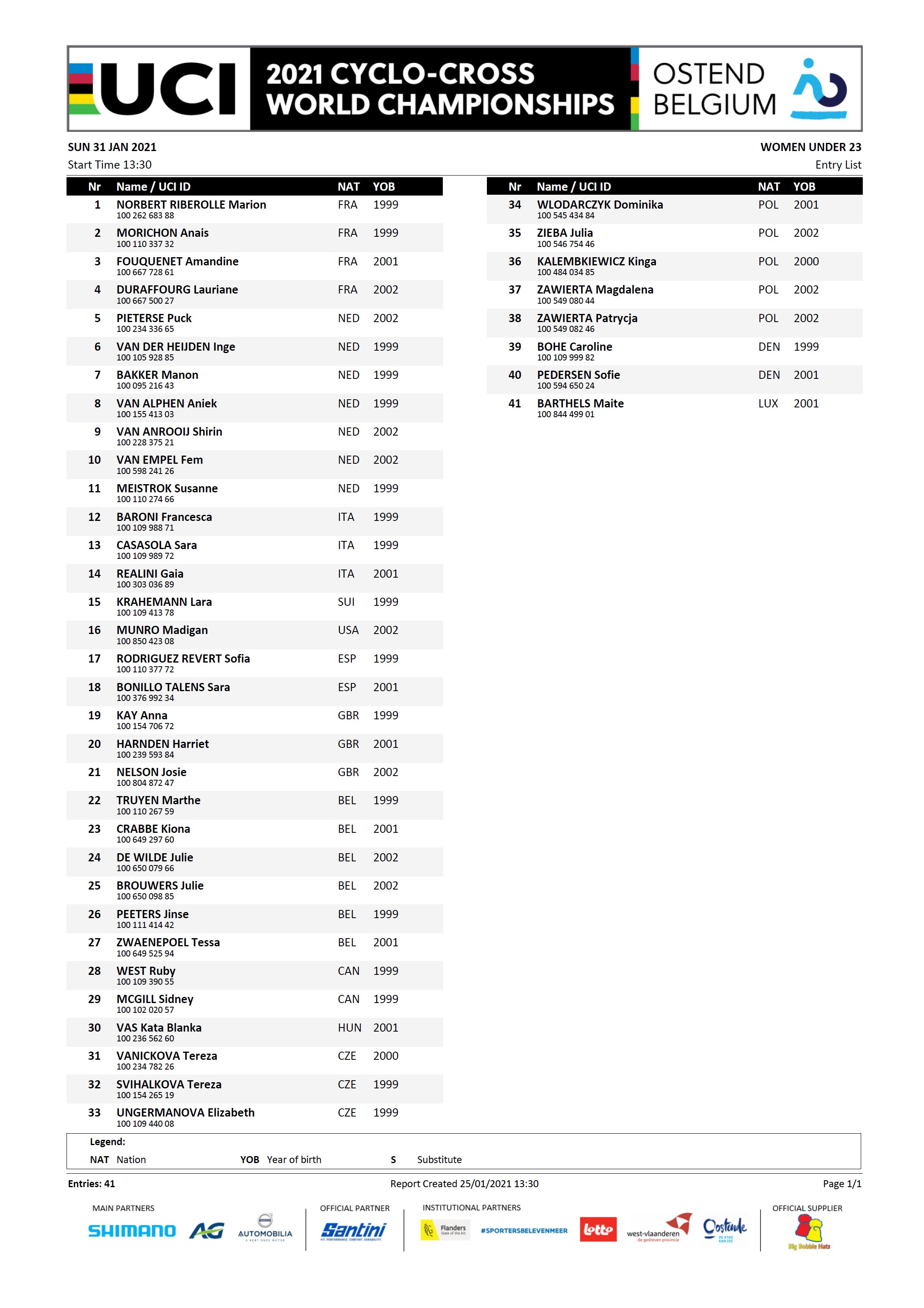 UCI statement: The Union Cycliste Internationale (UCI) confirm that the 2021 UCI Cyclo-cross World Championships scheduled on 30 and 31 January in Ostend (Belgium) are maintained following the introduction of additional measures – reduction of accredited persons and toughening of sanitary regulations – to ensure a safe event in an extremely challenging context.

After constructive discussions between the City of Oostende, Flemish Minister of Sports Ben Weyts, cycling's governing body the UCI and Belgian Cycling, Oostende will be able to welcome the best cyclo-cross riders of the world at the major annual event of the discipline. During two days of fierce competition, Under 23 and Elite riders will battle for the iconic rainbow jersey on the unique course, with a mix of sand and grass.

UCI President David Lappartient said: “I would like to thank the spirit of cooperation demonstrated by all the players, organisers and competent authorities, who have made it possible to safeguard the Championships for the benefit of the athletes, viewers, partners, and all fans of our sport despite the current very challenging circumstances." 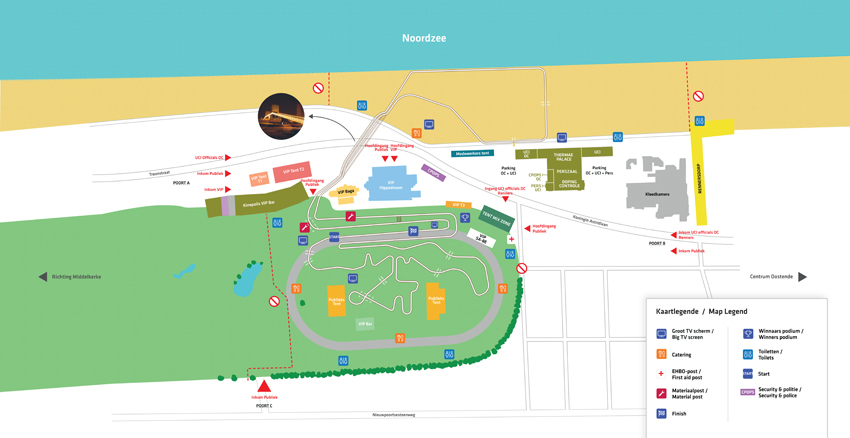 The 2017 Belgian Championships were decided at Ostend and the Worlds course is very similar with the course passing over a huge purpose-built bridge onto the beach section. Watch the 2017 Elite men's and women's Championships below.


MONDAY 25th JANUARY: PM
The tide could affect the amount of beach running/riding!

FORMER World Champion Erwin Vervecken takes a look at some sections of the Ostend course. According to Erwin the tides at the weekend could play a part in how much of the beach section is rideable!

CZECH Zdenek Stybar (below) will be the third previous World champion on the start line in Ostend on Sunday after making a surprise late decision to race for his country.

"Normally we would now be at a training camp in the Algarve", Štybar told NOS today, but with the current corona travel restrictions the Belgian-based rider will not go there and will be at home instead.

Deceuninck-Quick-Step team boss Patrick Lefevere gave the three-time World 'cross champion the green light to join the Czech team. Stybar has not raced the Worlds since taking his third title at Hoogerheide in 2014 ahead of Sven Nys. Stybar also took the rainbow jersey in 2010 and 2011.

Asked about his chances of winning, Stybar replied: "I give Mathieu a 50 percent chance, Wout 49 percent and myself 1 percent." The Czech star has not raced any cyclocross races this winter. 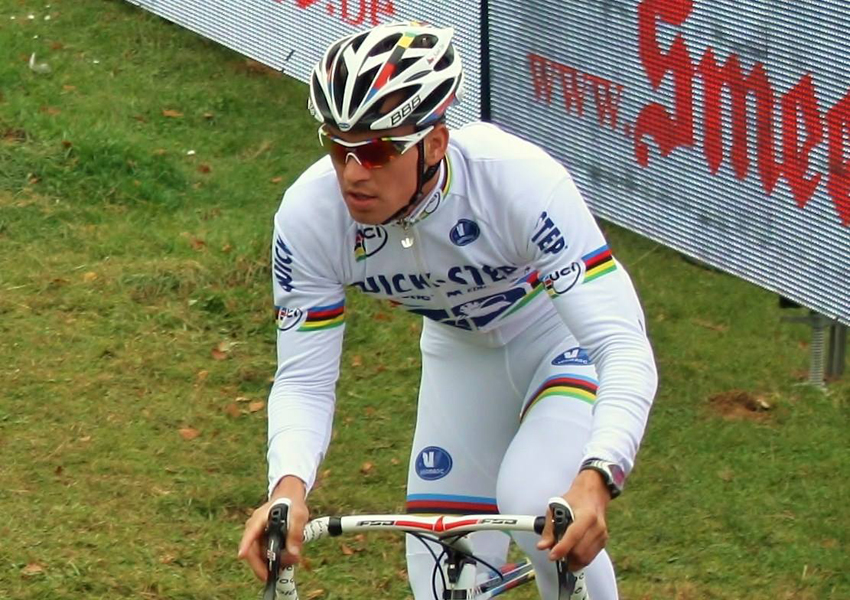 MONDAY 25th JANUARY: PM
Fabio Aru will NOT race the Worlds for Italy

ITALIAN climber Fabio Aru will not now race the World 'cross Championship on Sunday. Aru contested a few cyclocross races this winter and finished tenth in the Italian Championships. On the road, Aru is believed to be making his debut for Team Qhubeka-Assos at the Tour de la Provence, February 11-14.

"I did six races, everything went very well, I was well received, but the World Championship would be too much: I really care about the blue jersey, but it's right to give way to those who are more specialist than me and invest all year in cyclocross. I will cheer for the Azzurri in front of the television and I'll be back for sure," Aru told La Gazzetta

SUNDAY 24th JANUARY: PM
Organisers: "We hope there will be a chance to race next weekend"

AFTER the Mayor of Ostend Bart Tommelein cast doubt on whether the UCI World Championships will go ahead next weekend (below, this morning), event organiser Rik Debeaussaert told Sporza on Sunday afternoon, "We hope there will be a chance to race next weekend."

"At the moment we assume that the World Championships will continue. The course is actually ready, we will finish the details from Monday," Debeaussaert added. "Everyone present will undergo a PCR test and the number of staff has been reduced to a minimum in order to have as few people as possible at the venue."

SUNDAY 24th JANUARY: AM
Mayor of Ostend: "The event is currently under discussion"

WITH six days to go before the 2020-21 UCI World Championships are due to take place in Ostend, Belgium, a rise in the number of COVID cases in the coastal town is putting the event at risk of cancellation.

The Mayor of Ostend Bart Tommelein is still hopeful that the two days of racing can go ahead but he predicts that restrictions and rules at the event will have to be extremely strict. It is understood that the recent increase in cases are the South African variant of the virus.

"We will be looking at how the number of infections evolves," Tommelein said on this morning's De Zevende Dag (TV show).

"I am in consultation with Belgian Cycling, the UCI and the Belgian Minister of Sport," Tommelein told De Zevende Dag viewers. "We asked the virologists for advice and we are looking into whether the measures should be further tightened. No one will be on the World Cup course without a negative coronavirus test. If the World Championships do go ahead, we have to strictly limit the number of people anyway."

"The World Championships are currently under discussion. We will look at how the number of infections evolves," he added.

The UCI World Championships will go ahead in two weeks time but without the two junior races the organisation announced yesterday. The championship course is similar to the one where the 2017 Belgian Championships were decided including the huge bridge with a gradient of over 20% to get over to the beach and back.

UCI statement: "The competent authorities of Belgium have confirmed that both the Elite and Under 23 races for men and women at the 2021 UCI Cyclo-cross World Championships can go ahead as scheduled on 30 and 31 January in Ostend (Flanders, Belgium). However, due to the current pandemic (Covid-19) linked to the novel coronavirus (SARS-CoV-2), the Men Junior and Women Junior races will be cancelled."

This page will be updated with Worlds stories throughout the week.